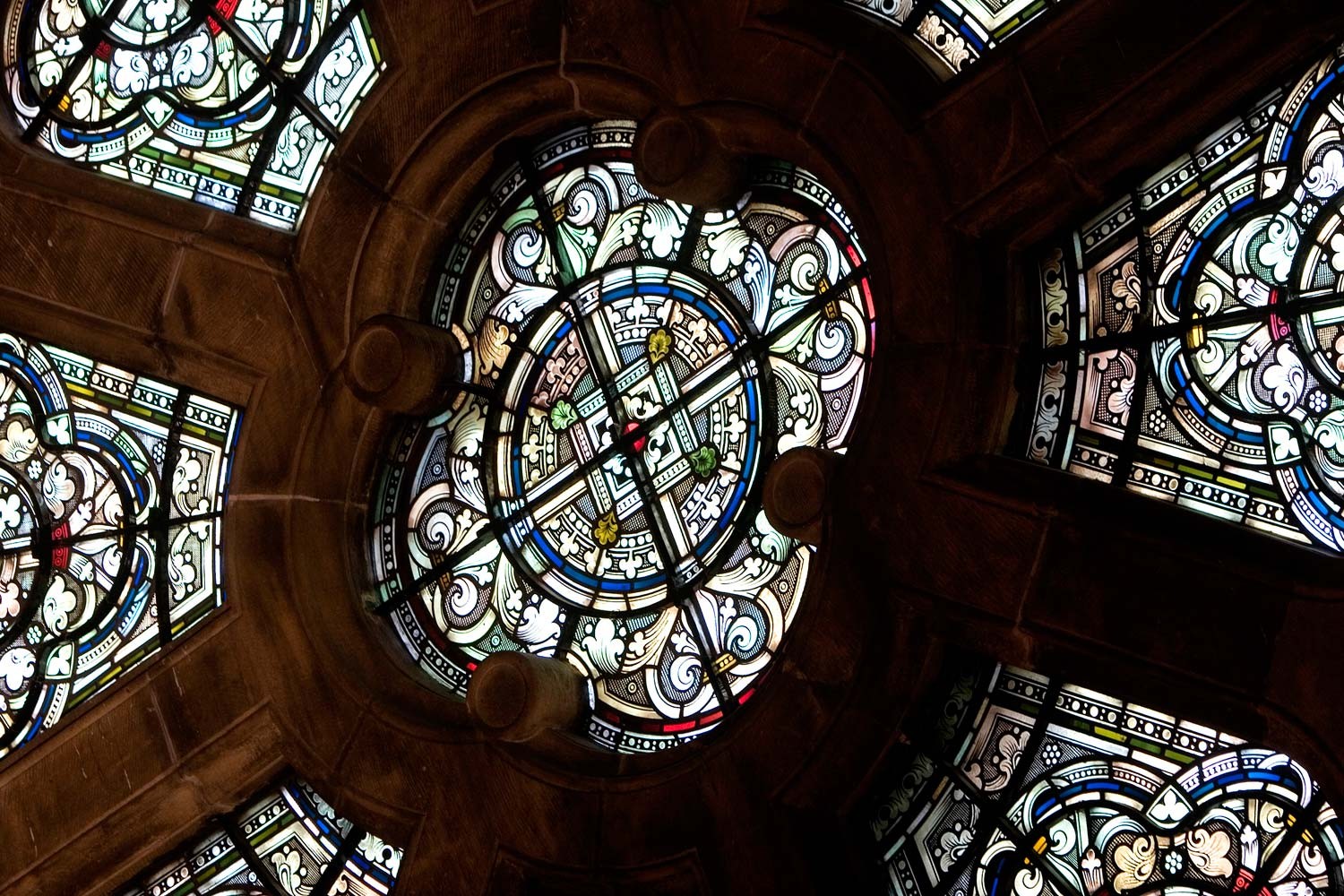 Jaw dropping....awe inspiring....versatile, soaring space....Mansfield Traquair has earned the mantel of “Edinburgh’s Sistine Chapel” and oh so much more.

It’s so much more than unusual or special… it is absolutely unique. The remarkable conjunction of herculean labour on the part of the artist, the brilliant colour and the soaring spaces have led to the building being called “Edinburgh’s Sistine Chapel”. From the grand neo-Romanesque architecture, to the truly exquisite murals of Phoebe Anna Traquair that adorn the interior walls, its absolute grandeur and beauty have made Mansfield Traquair Edinburgh’s most spectacular, surprisingly versatile and flexible venue.

Having undergone painstaking restoration to preserve and restore Mansfield Traquair to its former glory, it is now recognised as a vital piece of Edinburgh’s architectural and artistic heritage. Today, one of this utterly fabulous building’s most unique features is its sheer versatility. Events here are spectacular from the very second you arrive. You can’t fail to experience a sharp intake of breath when the cavernous spaces make their first impression. You’ll wonder at the intrigue and beauty of the murals, the magnitude of the stone, and the sheer majesty and sense of occasion will complete your descent into a state of adulation.

Conveniently located at the eastern edge of Edinburgh’s New Town, the Mansfield Traquair Centre, fondly known as Mansfield Traquair, is ideally situated for most guests. However, brushing practicality aside, it is upon entering through the magnificent doors for the very first time that the impact of this venue makes its mark. Your guests will be astounded and intrigued by the wonder and majesty of “Edinburgh’s Sistine Chapel”, the inspirational Mansfield Traquair.

Breathtaking visions of apocalyptic and biblical scenes; angels and cherubim, apostles and prophets abound in art which is reminiscent of Italian Renaissance, while also paying homage to the Celtic and Scottish tradition and the greats of the Arts and Crafts movement.

When the Catholic Apostolic Church commissioned the church, its vision was of a church filled with paintings of apocalyptic and biblical scenes. In 1892, Phoebe Anna Traquair was selected to fulfil that vision through the painting of murals.

The various murals depict different scenes from the old and new testaments, and while are altogether truly breathtaking, are also easily appreciated as individual art works.

The Chancel arch is one of the most imposing murals, being both 19 metres high and the most formal in style. A rainbow covers four great cherubim - an evangelist holding an open bible; an Apostle clutching a crown; a Prophet holding a harp, and a Pastoral cherub carrying a lamb and a staff. These cherubim (painted four times life-size) are the main focus of this mural, and each is symbolic of one of the four order of the Catholic Apostolic ministry.

Painted in 1895, the two chancel aisles reflected Traquair’s individual style more so than the chancel arch, with more decorative detail in the portraits. Although the colours were still vivid, the hues were subtle and lighter in Traquair’s interpretation of the parable of the Wise and Foolish Virgins. An Italian influence shines through, with the design reminiscent of Botticelli, though the borders on the north chancel aisle pay homage to the Celtic and Scottish tradition – most probably a tribute to the great Arts and Crafts figure, William Morris, who died in 1896.

Traquair adopted a different style when painting the nave – still echoing Italian murals, but edging closer to the style of watercolour illustrations. The north wall was adorned with scenes from the New Testament – various events from the life of Christ – while the south wall depicted stories from the Old Testament, such as Noah, and Adam and Eve.

The west wall was an incredibly important mural, as it was the focal point for the priest during services, and for the congregation on their departure. In this mural, the Second Coming of Christ is glorified by a host of angels singing and trumpeting the news, while the risen are embraced by angels. This mural differs from the others in the impressionistic style exercised by Traquair.

The mural is supported by a large border below, showcasing three images. Two of the images are of angels giving love and relief to mortals, while the third, central image is one of Pentecost.  The portraits of the Apostles highlight Traquair’s penchant for drawing portraits from real life, while a woman in pink kneels before them. Whether this figure represents Traquair or not, this Pentecostal scene marked the completion point of her murals.

The herculean labour of Phoebe Anna Traquair’s original creation was mirrored by a team from across the globe who painstakingly revealed the splendour of Mansfield Traquair. From dirt and damp, cobwebs and crumbling plaster, the awe-inspiring majesty of the building slowly emerged enlightening all to its magnificent beauty.

With Mansfield Traquair’s varied history of neglect, it was only to be expected that the murals would suffer. When the Trust took over the building, cracks and loose plaster were rife, and the beautiful images covered in dirt and cobwebs.

In 2003, a restoration project was launched, led by Fiona Allardyce of Historic Scotland’s Conservation Centre. The momentous job would involve students from all over Europe, beside Historic Scotland and the Trust, and would reach completion in 2005.

The south chapel was the first section to undergo the attempts at restoration, as it loosely resembled a miniature version of the larger building, and meant that the team could confront and address the problems that would be posed by the larger building early on.

Over the years, damp had penetrated the walls, damaging the murals and rendering them discoloured and dark – an impression not aided by the layers of dust. The first step was to vacuum the undamaged areas, and then the various types of dirt – including oily residue and bird excrement amongst others, could be removed using appropriate substances applied by cotton wool swabs.

The original plaster was coming loose in areas, and so was vacuumed out through small holes in the murals, and replaced with a mixture of grout and marble dust, injected into the walls with a thick lime mortar.

Cracks were filled using a marble powder and lime putty mixture, with deep cracks using a coarser lime mortar too. Loose paint had to be fixed in place, and various methods were used, such as the injecting and brushing of modern adhesives behind and onto the paint, and, in some cases, using heat to seal it.

The conservators also had to contend with previous substandard attempts to recreate a missing part of the murals. This area was filled over and repainted using watercolours, then a pointilliste technique was employed to recreate the original design to the high standard demanded by the project.

The restoration of the murals was a painstaking project. The Herculean labour of Phoebe Anna Traquair in her creation of the murals has been mirrored in the conservation team’s effort to preserve them, which took two years to complete. Now, with the murals restored to their former glory, it is plain to see why Mansfield Traquair is known as Edinburgh’s Sistine Chapel.

Inspired and visionary woman of her time, Phoebe Anna Traquair spent eight years of her life creating the herculean works which earned Mansfield Traquair the title of “Edinburgh’s Sistine Chapel”. Her vivid, striking and truly beautiful murals interpret religious scenes, inspired by Blake and Renaissance, and reflect her status as an eminent figure in the Arts and Crafts movement.

Well-educated for a woman of her time, she was trained in art and her style reflected the influence of Celtic illuminated manuscripts and Pre-Raphaelitism. She was inspired by the Romantic poet, artist and religious visionary William Blake, and by Italian Renaissance art – an influence her visits to Italy in 1889 and 1894 would have encouraged further.

Traquair became an eminent figure in the Arts and Crafts movement. She was known for her embroidery, enamelling and illumination – amongst other crafts – but it was to be her murals that would bring her fame.

It was in 1892 that she was commissioned to decorate the interior of the then Catholic Apostolic church with figurative, religious scenes. The Church provided scaffolding, met the cost of her tools and materials, and also paid her an unknown fee – the first time Traquair had received payment for her work.

She began work on the murals in 1893, and completed the work in 1901. Phoebe Anna Traquair is now forever indelibly linked with Mansfield through the transformation of the interior with her vivid and striking interpretations of religious scenes and imagery.

Over 17 decades of beauty, intrigue, effort of the most epic proportions all culminating in evolution of a church, a venue, a building which has truly earned its mantel as 'Edinburgh's Sistine Chapel' - as majestic as it is magnificent.

Friend (a definition): a person who one knows and trusts...a person with whom one is allied in a struggle or cause...The ‘Friends of Mansfield Traquair’ introduced “Edinburgh’s Sistine Chapel” to the world, all the time ensuring its protection, preservation and restoration.  Sweeping away its shroud to reveal the glory of a place unlike any other, the Friends have given Mansfield Traquair its well-deserved future.

The Friends’ efforts were focused on raising the profile of the building by highlighting its association with Phoebe Anna Traquair, who was the subject of an exhibition in the Scottish National Portrait Gallery the following year. Public awareness grew as a result of the Friends’ activities, and gave rise to a widespread resolution to improve the state of the old building.

The Mansfield Traquair Trust was formed in 1993 following growth of public concern at the deterioration of the condition of the Church, the damage to the murals by Phoebe Anna Traquair and the lack of an acceptable or viable use for the building.

The aims of the Mansfield Traquair Trust are to seek a viable long-term future for the building and to ensure that the fabric and the murals are repaired and conserved for the benefit of the public at large. All income and expenditure is dedicated to achieving these aims.

Further information about The Friends of Mansfield Traquair Centre can be found here.

Marrying historic values with contemporary vision and in the process providing Mansfield Traquair with a life-line continues to be the focus of the Scottish Council Voluntary Organisations, who continue to ensure the building realises its full potential and secures a  long-term future.

The SCVO has, and continues to play a fundamental role in the renovation and preservation of Mansfield Traquair. By realising the potential for converting the lower parts of the building into offices, they have provided the building with a long term future as the headquarters for the SCVO.

The SCVO represents the Scottish voluntary sector through its work, providing a range of services which help voluntary organisations operate more effectively. The building is ideal for the SCVO due to its great central location set in attractive surroundings, and can be accessed by people with disabilities, besides being a pleasant and comfortable place to work. The ongoing relationship between the traditional building and the modern organisation exemplifies how the past and present can work together to mutual benefit, and the results have been a lifeline for Mansfield Traquair.

Please don’t worry if you find that browsing results in your jaw dropping rather unattractively – it’s a normal reaction.  We call it the “Mansfield Effect”

Seeing is believing and when it comes to Mansfield Traquair, a visit is all it takes to be forever smitten.  Our 360 tour will give you just a taster of ambience that can be created, the beauty of the unique spaces and the potential to create an event to be remembered.

When viewing the 360 tour, don't forget to use the options at the top right corner of your screen to see Mansfield Traquair empty and fully set up as an evening venue.